Necropolis and Ritual Structures from the Early Bronze Age near the Village of Dubene, Karlovo Region

Necropolis and Ritual Structures from the Early Bronze Age near the Village of Dubene, Karlovo Region The necropolis and the ritual structures are situated 2 km southeast of the village of Dubene, Karlovo region, between the Stara Planina and the Sredna Gora mountains in southern Bulgaria. The necropolis encompasses at least nine separate mounds, four of which are smaller and lower and five are larger and higher. The larger mounds reach 25 m in diameter and 2.70 m in height. The lower mounds, situated among the high ones, differ in diameter, ranging from 5.50 m to 14.50 m, while their height reaches 25cm above the surrounding terrain. Some mounds were dug to a depth of 60 cm into the ancient terrain, and most often ceramic vessels – at least four and sometimes more than five – were deposited in them. They were covered with a layer of stone pebbles of different size, which were heaped immediately above in a thickness up to 40 cm. In some of the structures the pebbles were mostly medium sized, while in one structure the covering was composed of large pebbles only. The mounds should be dated to the third stage of the Early Bronze Age (Early Bronze Age III) in Thrace in the Bulgarian periodisation (Лещаков 2006, 177–182), that is, the late third millennium BC (Христов 2005; Hristov 2006). A settlement was located 400 m southwest of the necropolis and the structures; it was inhabited continuously during the Early Bronze Age. Thus, the necropolis is likely related to it. Fig. 02 Ritual structure No. 6, viewed from the southwest. 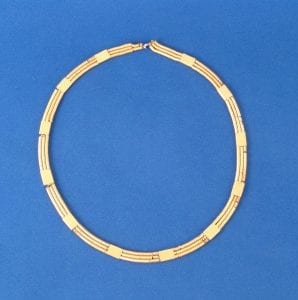 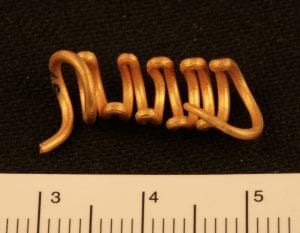 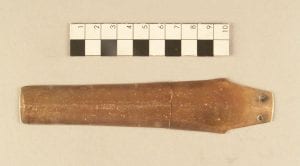 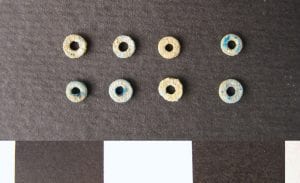 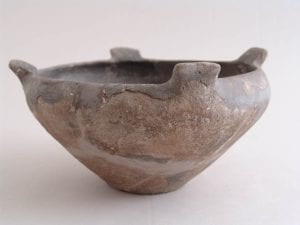 Ritual Structure No. 2
The structure was investigated in 2004. However, looters’ trenches as well as numerous agricultural activities in the terrain have almost ruined this archaeological structure. Pebbles from the covering were scattered mostly in a southerly direction, and only a short curve in the northern part of the area under study could be regarded as part of the original stone covering. The pebbles there are of medium size, although some are larger. Sherds of at least five clay vessels and numerous gold items were found interspersed in the soil.
The finds include: biconical beads, ring-shaped beads of small, medium and large size, small cylinders, round appliqués with decoration in relief, convex appliqués with attachment openings, a spacer, a prismatic plating with almost square cross-section, axe-shaped items, a spacer for beads, an element for bead-production with 11 holes, and a spiral (one and a half coils) pendant. Due to the severely disturbed structure of the mound, no bones were found.

Ritual Structure No. 3
This was the northernmost of the smaller mounds; it was investigated in 2005. The pebble covering was 9.44–9.95 m in diameter and 30 cm thick. There was a shallow hollow dug into the mound that measured 6.90 x 7.30 m and up to 20 cm in depth. Eight deep (up to 1.10 m) and narrow pits (maximum diameter 0.80–1.05 m) had been dug next and were found filled with pebbles. These pits form a rectangular area with a northwest-southeast orientation and an apse in the southeastern wall, formed by one pit positioned slightly farther away. At least five different shapes of ceramic vessels – bowls, cups, pitchers, etc. – had been deposited in the central area of the mound. Some small fragments of bone and tooth enamel that bear traces of cremation were found among them. In addition, various gold elements from necklaces and small objects were found, including gold spirals, small ring-like beads (diameter up to 2.7 mm) with and without incisions across the peripheral edge, a small spheroid bead with deep relief on the outer edge, as well as two necklaces of beads. The necklaces might have been broken during their positioning among the other funerary offerings and in the process of building the stone covering, as many of the beads lay around and upon the vessels. Oppositely, the number of beads found scattered in the soil among the pebbles in the lowest two layers was significantly less.

Large Mound No. 3.
This mound reaches a height of 2.70 m and has a diameter of 25 m. Its embankment revealed two stone covers, the lower of which did not encompass the whole area of the mound. A burial was revealed underneath the stone cover. The skeleton lay in a shallow pit, and its head was in a west/southwest direction. Eleven gold biconical beads and a spiral were found to the north of the skeleton, to the south the golden end-piece of a scepter or of a dagger.

Ritual Structure No. 5.
Pebbles of medium size were found 25 cm below the surface of the terrain. They had survived in situ and represent part of the stone cover of a ritual structure. Several ceramic vessels were also discovered in situ below this. Some of the vessels are richly decorated with incised and white-incrusted ornamentation. One vessel is a bowl that was found in an inverted position and covered by two other vessels. In addition, a fragment of gold plate, a silver lidded box, a small ceramic cup that combines Thracian and Aegean-Anatolian elements – evidence of contacts with Asia Minor during the Early Bronze Age III – and a bronze knife with two gold plate elements on the grip were recovered. More than 5,479 gold items: spirals, spacers and beads (up to 4.3 mm in diameter), small fragments of bone, a silver dagger, a gold dagger and glass beads, were found south of this vessel and among the other bowls, dishes, etc.
Six heaps of pebbles were discovered around the ceramic vessels. During excavation it could be determined that these pits were filled mainly with pebbles of medium size. A ceramic vessel with a cup of the Yunatsite type deposited inside of it was found in Pit No. 1, while Pit No. 2 contained ceramic sherds. The pits differ in size. The discoveries of vessels in Pit No. 1 as well as the shallowness of three of the remaining pits suggest that a correction should be made to my preliminary view that was based upon the data from Ritual Structure No. 3: namely that the pits filled with pebbles had supported a wooden construction (Христов 2005, 129; Hristov 2006, 27). Now it appears more probable that they had served for entirely ritual functions and marked the space in which the ceramic vessels, the metal and glass object were to be deposited. Ritual Structure No. 5 partly repeats the situation in No. 2: the pits, which here are six in number, mark a rectangular space with northwest-southeast orientation, where the offerings had been deposited. This relates the two structures as constructions and gives reason to believe that Ritual Structure No. 5 likewise had once had a stone covering that could be interpreted as a sealing.

Ritual Structure No. 6.
This structure displays damages from the activities of looters: a pit of 60-cm depth was dug almost in the centre of the structure. The stone covering was almost circular and 14.50 m in diameter (Fig. 2). It encompassed two different kinds of pits. One was nearly oval with a maximal diameter of 8.40 m and a depth up to 36 cm. Fragments of three ceramic vessels, bowls and a cup, as well as 15 gold beads were found in its center. The ceramic sherds date this context to Early Bronze Age III. A second pit was located near the oval one. Its maximal width was 2.70 cm, and it can be compared to a ditch. Pebbles as well as one rock had been deposited in it. These stones were very large, some reaching 70 cm in length. The two pits were covered with pebbles of medium size. This was the first structure of such character to be investigated at this site.

This website uses cookies to improve your experience while you navigate through the website. Out of these cookies, the cookies that are categorized as necessary are stored on your browser as they are essential for the working of basic functionalities of the website. We also use third-party cookies that help us analyze and understand how you use this website. These cookies will be stored in your browser only with your consent. You also have the option to opt-out of these cookies. But opting out of some of these cookies may have an effect on your browsing experience.
Necessary Always Enabled
Necessary cookies are absolutely essential for the website to function properly. These cookies ensure basic functionalities and security features of the website, anonymously.
Analytics
Analytical cookies are used to understand how visitors interact with the website. These cookies help provide information on metrics the number of visitors, bounce rate, traffic source, etc.
Save & Accept